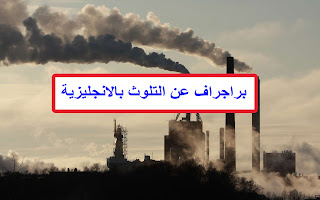 the pollution is the biggest one problems of this age there are
many kinds of pollution that make life difficult unhappy and unhealthy
the first kind is the most dangerous one which is air pollution. it is
caused by factories and cars sending out smoke this kind is commonly
found industrial and big cities in such cities air is not clean and
unhealthy
the other kind is water pollution factories pour chemicals into nearest
seas and rivers it is also caused by tankers spilling oil or towns
pouring waste those poisonous chemicals and waste make water dirty and
unhealthy to drink they also kill fish that people eat
many countries work hard to stop pollution and they succeeded air and
water on their cities become much cleaner they now breathe and drink
fresh and healthy air and water

Pollution is generally the result of changes within the environment surrounding living organisms, through daily human activities that cause the emergence of resources that do not correspond to the place where the organism lives.
Environmental pollution has many forms  such as Water pollution: environmental pollution results from industrial waste, acid rainwater contaminated with vapors and gases, radioactive waste, sewage and oil.
Air Pollution: Pollution is caused by suspended solids in the air such as smoke, dust, pollen, gases such as carbon dioxide, chlorine, ozone gas, radiation such as nuclear radiation, bacteria and bacteria such as human waste.
Soil pollution: The use of insecticides excessively , and the accumulation of solid waste inside and on the soil.
There are many solutions for the environmental Pollution such as; Construction of special plants to treat the waste of public and industrial establishments and the construction of factories for reprocessing.
Clean rivers and water from waste, and not to drill water wells near polluted areas.
Enact laws and legislations for the preservation of the environment, and support projects that are interested in the field of environment and conservation.

Environmental pollution is the result of the means by which humans enter pollutants into the natural environment created by Allah Almighty, and damage them, and create an undesirable imbalance in the environment, which causes significant damage to the environment and the organisms that live in them.
There are many causes of environmental pollution such as; Industrial progress. Gases and vapors from factories, transport, and fire. Natural pollutants resulting from natural phenomena such as volcanoes and earthquakes.
We should Conduct awareness campaigns within schools, universities, institutions and organizations to talk about pollution and its damage and how to combat it, and to broadcast awareness programs on television and radio stations.